To quote Wikipedia, Reactive Programming is a programming paradigm oriented around data flows and the propagation of change.

. This relationship defines a flow of data, in that it describes how the data for

is computed given the data for

. Suppose the values of

at time t=0 are 4 and 5 respectively. Therefore,

. Now, lets say that the value of

changes at t=1 so that

. By the definition of

mentioned before, it follows that

. Thus, the change in the value of

got propagated, causing the value of its ‘parent’

to change. I use the word parent because if we were to draw the relationship between

be the parent of

(like in a data flow graph). A common example of reactive programming is seen in spreadsheet software like MS-Excel, where the change in the value of a particular cell causes a change in the values of cells that depend on it by some pre-defined equation.

Reactivity, in general, is a paradigm that’s difficult to find in Python-based systems, and that includes Django. This post describes a method to perform mathematical computations (not reactive programming in general, just mathematical calculations) in a reactive manner in Django-based systems. I will soon describe the exact problem solved by my code, with suggestions on how to modify it to suit your needs.

Heres the prerequisites, apart from Django:

i. We will use Celery to perform tasks asynchronously.

ii. We will use Redis as for temporary data storage, and synchronization.

This is a good place to look if you want to set up both.

iii. We will use python-redis-lock to use Redis for locking mechanisms. Locking ensures that one data update/read doesn’t get messed up due to another update that’s running in parallel.

We will refer to

are input values that we acquire from certain sources of data (whatever they might be). They are essentially the independent variables in this context.

(making it their ‘parent’ node). You can also say that

are the arguments for

in turn has two dependencies,

and another independent variable

You don’t know when you will receive the values of the independent variables. You also don’t know what order they will arrive in. Some of them may come together, some very frequently, etc. etc. Lets say that your application dictates that the value of any node remains valid for about a minute its received or computed. Whenever you have had the latest values of

come within the past 60 seconds, you would want to compute the value of

. The same logic applies to

Once the latest value of

is computed, you would like the node to ‘forget’ the values of its arguments(children). Therefore, whenever comes the next time that we have fresh values of

will be calculated again. The same logic once again applies to

. The code can be easily modified (and I will mention how) so that this restriction is lifted. In that case,

would be recomputed whenever the value of any of

changes, provided that the other values are still valid.

Whenever you receive/compute the value of a computational node (whether independent or derived), you would want to store its value – along with the appropriate timestamp – in your database.

Now lets see how this data-flow logic can be implemented in a flexible, efficient manner.

The whole functionality will be enclosed in a Django App called ‘reactive_compute’. It will have the following files:

First of all, we will need to define the derived nodes

, in terms of their Function and Number of Arguments. For example,

‘s function can be described as an Addition, with the number of arguments being 3.

on the other hand is a Multiplication, with 2 arguments. To remember this, we will first need to define the database model in models.py. You don’t store this information in Redis, since its ‘permanent’.

As you can see,

is a String that will act as an identifier for the Function. We will have “

” for Multiplication. But there must be someplace to implement those functions. Thats where the functions.py files comes in.

Adding the mapping as a dictionary to the

class allows easy importing. Each of the functions takes in the arguments(in appropriate order) as a list.

The following screenshot shows the appropriate database entries made for

in the Django Admin.

Now that we have defined the ‘nodes’ we need to direct the appropriate args to them. This is done by creating another model in models.py, for storing the data-flow information as tree ‘edges’. Every child is an argument for the parent.

doesn’t really matter for the operations of multiplication and addition, but for others(like subtraction), it might.

Heres a Django-Admin screenshot with the required entries for

As I mentioned earlier, we would like to store the values of the nodes, whenever they are updated. So heres a model for that:

And heres the contents of the db.py file, that define a function to store the latest value of a node into the database:

To present a complete example, the following are the contents of the admin.py file.

And finally, we come to the crux of the implementation – the tasks.py file. If you read the resource I mentioned for Celery installation, you know that the Celery task is defined in this file. I have heavily commented it, so do go through the in-line docs.

Given below is an example of using the above task in a simple Django view. It accepts the complete input as a stringified JSON object (like “

“), and makes a call to the Celery task.

Lets run the server and see how things work.
Heres that the data-logs look like given the input “ 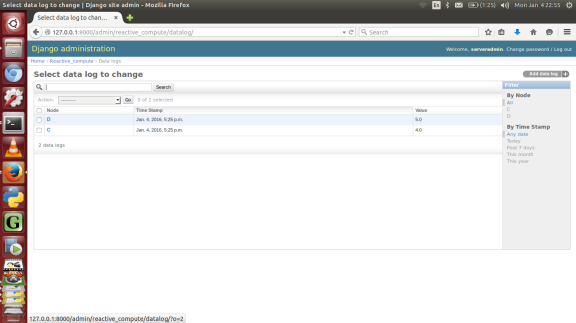 Within a minute, we provide “ 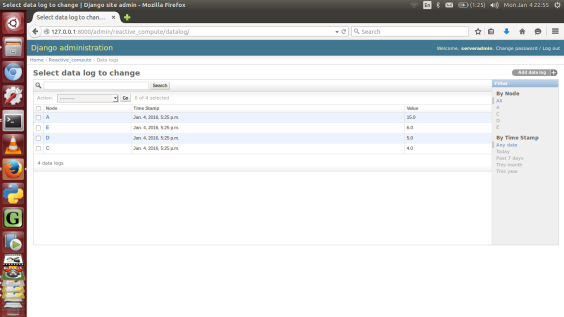 gets computed as well. Now let us provide all inputs, with new values: “

As you must have observed,

is computed with the latest value of

One unusual flexibility that this codes provide, is that we can update the values of nodes that are ‘usually’ derived, manually. Heres what happens if we provide “

You don’t need to Copy-Paste this code anywhere, its all present in my github repo. Feel free to fork it and send a PR if you can modify it in some useful way!

1. The way its implemented, you have complete control over how each computational node works. I have used simple mathematical operations, but you could have your own metrics/functionality written in. As long as you define the arguments and order them right, things will work well.

2. I have worked with floating-point numbers, but your arguments could as well be vectors! Then you might have to run eval over your Redis values, instead of a simple float() conversion. But since every call is made as a Celery task, your runtime will still be optimized.

3. Earlier, I mentioned that you could remove the restriction of deleting previous values of arguments (as long as they are valid). You could do this pretty easily by removing lines 85-87 in the tasks.py code. If you don’t want your node values to have a sense of time-based validity at all, you could just remove lines 106 and 107 from tasks.py.

4. If you want different values to be stored in different ways into the database, you could add another parameter to the

model, that specified a String that denotes how information about that particular node is added to the database. Ideally, this database storing would also be a Celery task.

5. You could also store the Data-Flow diagram better using a No-SQL database such as MongoDB.